I remember waking up on this day, eleven years ago, with an understanding that I was about to do something that would change my life, forever. At the time, I lived with a bunch of other guys in a house that probably should have been condemned and torn down. I got up that morning and went over to my friend, Danny Brown’s, house to get ready. Danny and his wife were in the process of moving to Seattle so their house was pretty much empty.

It was good for my thoughts, having that empty space. I did not have the distraction of video games to take my mind away from what was about to happen. Four or five hours from that point, I would be a married man.

However, let me back up a bit.

In April of 2005, I was single (nothing wrong with that) with no prospects of a relationship on the horizon, let alone marriage. I had a job that I enjoyed but was making very little money, so I had been living with six other guys in this house in Charleston, IL. We referred to our home as Madison Mansion, though it was far from that. None of us every cleaned, the back door was typically standing wide open (even at night) and one of the guys used the downstairs bathroom sink to clean his motorcycle parts. The basement was full of asbestos and one of my roommates kept pet rats inside of an old hollowed out television case.

I have to state, at this point, that I LOVED my living arrangement. The house was falling apart but I only paid a little over $100 a month total for all of my bills. I worked at Wal-Mart on third shift and had been taken under the wing of one of the department managers who also happened to be a minister at an area church. Together, we had started a Wednesday morning Bible study for third shift employees.

At first, it was just a handful of third shifters that met. We would typically meet up at an employees house for study after we got off work. The study started to pick up a little bit of attention from people on other shifts and we soon had a couple of second shift cashiers attending as well. One morning, my friend Catherine, said she had invited another girl to attend. The plan was to meet at Jackson Avenue Coffee and then drive over to the house in Ashmore where we would be having our study.

I remember sitting at the JAC that morning and being in a bad mood because this girl was late and we needed to get going. See, I am pretty big on getting to places on time and waiting for this girl was putting that in a bind. After a few minutes of grumbling to myself, the front door to the JAC opened and Catherine walked in, followed by the girl who I would end up marrying. Crazy how those things work huh?

That’s how I met Elisa. Some of us decided to head up to Subway after Bible study was over and Elisa was one of them. I really made no assumptions about her availability, especially considering that she was a super-intelligent, incredibly-beautiful, college student. At the time, I was 29 years old with only a high school education. My teeth were falling out of my mouth and I worked the third shift at Wal-mart.

What in the world could I have to offer to someone like her?

I guess I was wrong. She saw something in me that nobody else did, including myself.

I was frustrating for her. I was very interested in her but at the same time had put up some guards. I was a little uncertain if I wanted to give this relationship thing a try again. I have been in and out of multiple relationships up to this point with no success. Did I want to take a chance on another one?

We started dating in May. I remember going for a walk with her one day and talking about the future. I told her that day that I wasn’t really interested in dating anymore. I was looking for a wife, not a girlfriend. I wanted to be blunt about that because if that scared her off, it would be better to do it early in the relationship than later. To my surprise, this did not scare her. Instead, it set us on a course that moved much faster than either of us could imagine.

May 2005 – Established the relationship goals

That’s right. Less than two full years from the time we met, we were married and had our first child. Looking back at it, we might have been moving a little too fast. But, then again, maybe not. While many people rush into marriage only to see it fall apart, we have only gotten stronger.

So, I was at Danny’s house but it was time to head to the church. Danny was doing the video work for the wedding and two of my other friends, John and Jason, were there as well. We loaded up and made our way out to Hurricane Baptist Church south of Charleston where everything about my life would change.

This morning, Elisa asked me if I remembered our wedding day.

Are you kidding me? I think that is my most vivid memory. It was rainy outside and there were about a million people packed into this tiny country church. Matt McGregor officiated the service and my father stood in as my best man. Elisa sister, Andrea, was her maid-of-honor.

Now, let me stop for a second and lay down a disclaimer. What I am about to say is by no means intended to make any other women feel inferior or unattractive. Yet, here it is.

There has never been a woman, who has ever lived, that was more beautiful than Elisa that day. Never. When the front door of the church opened and she walked in, time stopped. I think, for a moment, that everyone in the room stopped breathing. I remember being so nervous that I would do something to mess this moment up. An eternity passed between that moment and the moment when she arrived at the alter. I knew then that I was about to become the most fortunate man to have ever lived.

The service was wonderful. We followed it up with a reception in the basement, which was even smaller than the sanctuary. People showered us with gifts and hugs, and then, it was over. It was quiet again. Elisa and I were pretty poor so there was no extravagant honeymoon, no long and expensive trip.

We took the money that people gave us and spent the night in a motel in Mattoon, IL. We got the honeymoon suite (hot tub in the bedroom) and ate dinner at Steak & Shake which was across the parking lot. It was definitely nothing fancy but I fell asleep that night married to the woman of my dreams.

Eleven years have passed. We have had seven different jobs combined. We have lived in five different houses. We have housed over 70 kids not counting our own. Life has taken a lot of turns that we did not anticipate that day at the church. However, one thing is for certain. There is not one single other person who I wold rather live this life with than Elisa Marie Strange. 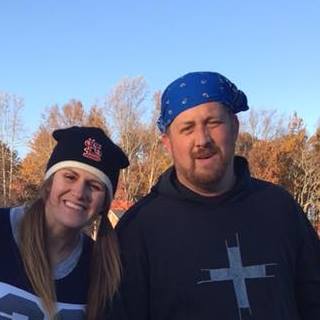 I love you, baby. Happy Anniversary.