It’s always interesting to look back at a family member who has passed on. Particularly when a decent amount of time has passed since it happened. What memories work there way to the surface when their name is mentioned? Are the memories good or are they bad? It probably had a lot to do with the kind of person they were. I mean, all of us have a good and bad side. While some people may have extremely fond memories of us, others might spit our names out of their mouths like a bad taste.

Seven years ago, this week, my father and my wife’s father both passed away. It was a crazy week that I would never wish on anyone. I don’t think I really thought about it at the time, but that week took two grandfathers away from my children. Now, my mother had remarried a few years prior. So, my stepdad Lonnie would fill the role of grandpa for my children and would be the only one they would ever know. I mean, Sydney has some memories of her grandpas as she was five years old when they passed. But, you see my point. I was in a similar position as a child.

Today, I’m thinking about my Grandpa Ronald. Growing up, I only had one grandpa. George Strange passed away before I was born so all I knew was Grandpa Big Ron. Some people, those who did not know him as well, might not have a high opinion of my grandfather. After all, he had an affair with another woman and left my grandmother. What kind of man would do that, they might say? Hey, fair point. That was a fairly crappy thing for him to do.

But, that’s not the man that I knew.

Grandpa Ronald was an amazing man. I don’t think I have ever seen a greater example of fatherly love in my life. He loved his children without condition and his grandchildren, perhaps even more.

Grandpa loved Cardinal baseball and WWF ‘rasslin. I remember sneaking out of church a little early on a few Sundays so that we could get home in time to watch Hulk Hogan drop the big leg drop for the win. I remember going for rides with grandpa in his truck or just hanging out with him up at his Plumbing and Electric store. 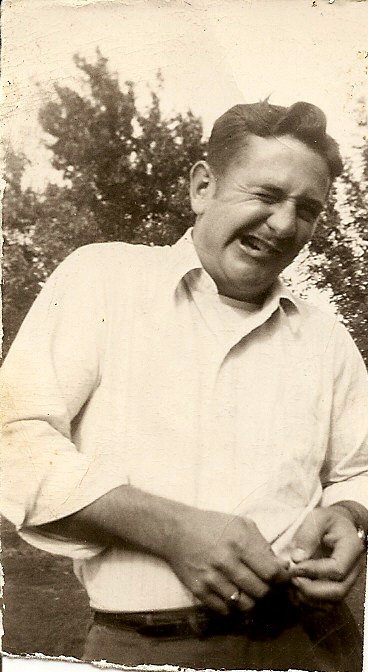 One day, grandpa took me with him for the day. I remember hopping in his truck and taking off early in the morning. We stopped at a gas station where he got me a snack and a soda as well as the newest issue of MAD magazine. We just drove around for the day. Man, I couldn’t even tell you what all we talked about that day. We ended up over at Stephen A. Forbes State Recreation Area. There was a little food stand down at the lake marina where we grabbed some lunch.

At this moment, my greatest memory of my grandfather began to build. But, to properly understand why I need to backtrack a bit. See, the thing about my grandpa is that his health was never great. I don’t ever remember a time during my childhood when grandpa was healthy. At the end of his life, he relied on a constant stream of oxygen to stay alive. It would be a struggle for grandpa to be out on his feet and moving all day long. On this day, to a selfish child such as myself, you couldn’t tell.

There were hiking trails all over the park and we started off on one. Up and down hills, we walked for quite a while. I’m sure that the time on the trail was not nearly as long as I have built it up to be. However, regardless of the amount of time, I know that it was a struggle for him. But, we did it.

It was years and years later when grandpa passed. It’s not as if this day was one of the last I would spend with him. It was just the best. That day was all about me. He didn’t follow me around with his nose stuck in his smartphone (not a thing then, but he wouldn’t have anyway). He didn’t push me to hurry up so he could get on to something else. He delighted in me.

Guys (and gals), build those memories with your kids and grandkids. They are the magic that will sustain our relationships with our loved ones well after they have passed.

Life is Strange. Live it Well.

One thought on “Grandpa Big Ron”